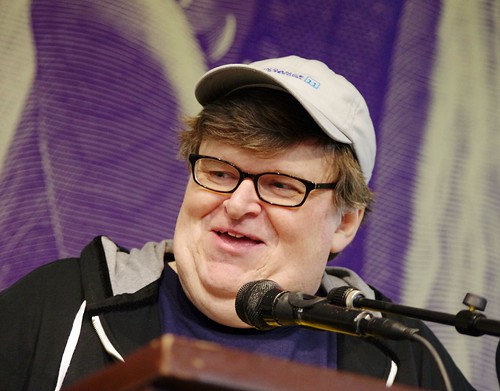 Michael Moore sent this friday a letter to the Governor of Michigan, Rick Snyder. Earlier in the week he had joined with 25 other governors in telling the President that they would block Syrian refugees from settling in their states. Now, Moore calls to join him in defying this act of bigotry: »Their actions are unconstitutional, and worse, immoral. I am going against this «ban» by offering to give up my apartment in Traverse City, MI, to Syrian refugees who are currently seeking entry into our country.«

Here is the letter that Moore sent to the governor:

I just wanted to let you know that, contrary to your declaration of denying Syrian refugees a home in our state of Michigan, I myself am going to defy your ban and will offer MY home in Traverse City, Michigan, to those very Syrian refugees you’ve decided to keep out. I will contact the State Department to let them know I am happy to provide a safe haven to any Syrian refugee couple approved by the Obama administration’s vetting procedures in which I have full faith and trust.

Your action is not only disgraceful, it is, as you know, unconstitutional (only the President has the legal right to decide things like this).

What you’ve done is anti-American. This is not who we are supposed to be. We are, for better and for worse, a nation of descendants of three groups: slaves from Africa who were brought here in chains and then forced to provide trillions of dollars of free labor to build this country; native peoples who were mostly exterminated by white Christians through acts of mass genocide; and immigrants from EVERYWHERE around the globe. In Michigan we are fortunate to count amongst us tens of thousands of Arab and Muslim Americans.

I’m disappointed in you, Governor Snyder, for your heartless and un-Christian actions, and for joining in with at least 25 other governors (all but one a Republican) who’ve decided to block legal Syrian refugees from coming into their states. Fortunately I’m an American and not a Republican.

Governor, count me out of whatever you think it means to be a Michigander. I look forward to welcoming Syrians to my home and I wholeheartedly encourage other Americans to do the same.

P.S. By the way, my 700-sq. ft. apartment in northern Michigan is a little small, but it’s got cable, wi-fi and a new dishwasher! Also, no haters live on my floor! Stop by any time for a hot chocolate this winter.

Michael Moore, Great-grandson of refugees and immigrants, insists: »I’m not kidding about this. I’m making my apartment in Michigan available, rent-free, for six months to a year until the Syrian family gets settled and is doing well on their own. My family came here from Ireland in the 1800s. I know what it was like for them. There was bigotry and harassment — but there were also those who held out a helping hand. That I would have the chance to do the same thing for a new family of immigrants 150 years later is an honor. (Besides, legend has it that St. Patrick was originally from Syria/Lebanon — so I’m just passing on the green!)

I’ve written to Secretary of State John Kerry informing him that my home is available to place a Syrian couple. I’ve also asked him to please speed up the process of admitting these refugees (it’s taking 18 to 24 months right now, and that’s unacceptable).

I’m asking anyone who can, anyone who has spare rooms in their homes or an empty apartment, cottage, or whatever, to make it available for Syrian and Iraqi refugees for between six months and a year while they’re being settled in the U.S. If you can do this, would you please click here and sign up on the #MyHomeIsOpen registry. Your name and contact info will be kept private and will only be shared with the appropriate refugee agencies sanctioned and overseen by the Obama administration and its participating NGOs. They will contact you when they have refugees that they’ve vetted and need to be placed in homes.

THIS is what we want the »American way« to be from now on. No more war, or interfering in other people’s lives, no more turning our backs on the messes that we’ve created.

Thanks for joining with me in this effort. We are, indeed, our brothers’ and sisters’ keepers. I can think of no better way to celebrate Thanksgiving and the holidays this year than by helping those who are suffering from the mistakes that have been made in our name.«